July is a great month for family travels—with kids out of school, adults longing for some time away from home, and the weather inviting you outside for some sunshine and change of scenery. This time of year is ideal for sightseeing, world-travelling, food-tasting, and all-around new experiences.

If your summer travels bring you near any of the famous U.S. cities mentioned below, make sure to stop and grab a bite of their famous prized sandwich. Or, if you’re feeling particularly adventurous, plan a grand cross-country road trip, stopping at all the major foodie cities along the way!

For more famous American foods, with an emphasis on burgers and barbecue, make sure to check out last week’s blog post: Summer Grilling Recipes for All 50 States. A famous style of barbecue in Baltimore is “pit beef,” in which a minimally-seasoned bottom or top round roast is grilled directly over charcoal, then thinly sliced deli-style and served on a roll, typically with sliced raw white onion and horseradish or “tiger sauce,” a mixture of horseradish and mayonnaise.

Chap’s Pit Beef, which has been nationally recognized by numerous media outlets such as The Washington Post, Food Network, Travel Channel, Zagat, Guy Fieri’s Diners Drive-ins and Dives, Man vs. Food, and Anthony Bourdain’s No Reservations, is one of the most iconic restaurants serving up this style of barbecue. Their Baltimore location has been around since 1987 and they also have a location in Aberdeen, MD and a recently-opened location in Frederick.

Check out the above Pit Beef Sandwich from Chap’s, served on a Martin’s Potato Roll!

This upstate New York specialty consists of cubes of marinated meat (chicken, pork, beef, or lamb) which are skewered and grilled, then served on a hoagie roll or with sliced bread. The secret lies in the special marinade used for the meat, which tastes a bit like Italian dressing. The origin of the name is uncertain, but it may come from the Italian word “spiedino,” meaning “skewer.”

Try this recipe for Grilled Chicken Spiedies on Martin’s Long Potato Rolls. A fun way to serve them is to wrap the bun (or bread) around the still-skewered meat and use it as a grip to pull it off the skewer. The city of Chicago has a strong Italian influence, which is especially apparent in many of its popular food dishes. One such dish is the Italian Beef Sandwich—thinly sliced roast beef dipped in au jus (called gravy) and served on an Italian-style hoagie roll along with giardiniera, a spicy mix of pickled vegetables such as hot peppers, carrots, celery, and cauliflower. The sandwiches come in several other variations as well; you can add Italian sausage (called a “combo”), top it with cheese, or order it “wet” in which case the entire sandwich (bread and all) is dunked back into the beef juices to soak up more flavor. This legendary sandwich was invented in the Brown Hotel in Louisville, Kentucky by Fred K. Schmidt in 1926. Legend has it, he created the dish as a unique meal to serve to his guests after their late-night dancing. The open-faced sandwich, of turkey, bacon, tomato, and a creamy Mornay sauce, is true American comfort food. This classic sandwich isn’t so much associated with the city as it is with one of its most famous residents—Elvis! The “King of Rock and Roll” was reportedly a big fan of heavy Southern comfort food such as over-indulgent fried sandwiches of peanut butter, banana, and occasionally bacon. In fact, this dish is so closely associated with him that it is often simply called “The Elvis.”

Try our healthier, grilled version of the sandwich, with the added ingredients of honey and cinnamon. 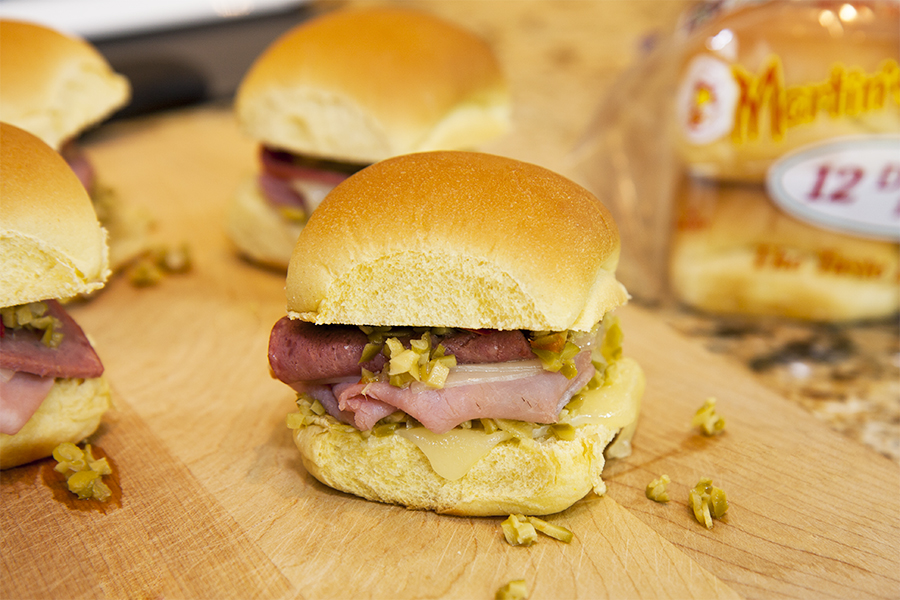 This famous American sandwich was created by Italian immigrant, Salvatore Lupo, in 1906 at his store, Central Grocery Co. on Decatur Street in New Orleans. It is typically served on a large, round bread loaf and stuffed with cold cuts, cheeses, and a signature olive salad—chopped olives mixed with pickled giardiniera veggies.

Try our mini muffulettas made with Martin’s Dinner Potato Rolls! Like any good legend, the history of the Reuben is heavily debated. Some insist the sandwich was created in New York City. Visit Omaha, Nebraska, however, and they’ll tell you another story—that of Reuben Kulakofsky and his fellow poker players, who invented the sandwich at the Blackstone Hotel, with the help of hotel owner, Charles Schimmel.

Whatever the story, this Jewish deli-influenced corned beef and sauerkraut sandwich with Swiss cheese and Russian dressing is a famous American original. Probably the most famous sandwich on this list, and the most easily identified, the steak and cheese sandwich is so synonymous with its city of origin that it’s usually called “Philly Cheesesteak” no matter where you are in the country. Many people, especially residents of Philly, are familiar with the decades-long battle between two Philadelphia-based restaurants, Pat’s and Geno’s, to be crowned “best cheesesteak.” While these may be the two most popular restaurants, there are a multitude of locations around the city serving up the classic sandwich.

This classic hot sub is made with thinly sliced and seared steak, topped with melted cheese. The most common way to order one is “whiz wit” which comes topped with a processed cheese sauce and (with) grilled onions, but provolone and American cheeses are also popular. Other optional toppings include mushrooms, ketchup, and hot or sweet peppers, or you can add lettuce, tomato, and mayo to make a “cheesesteak hoagie.” The origin of the “Pittsburgh Sandwich” is disputed, but it was most likely created in the early 1900’s as a workingman’s lunch or late-night meal (depending on which story you believe). One thing that is certain, however, is that the iconic sandwich started at Pittsburgh-based restaurant, Primanti Bros.

This all-in-one meal starts with a sandwich of white bread, sliced deli meat, and provolone cheese, then adds a handful of thick-cut French fries and a pile of vinegar-based coleslaw directly inside the sandwich. Try our Primanti Bros. copycat recipe on Martin’s Old-Fashioned Real Butter Bread. New Jersey food is often famous by association with nearby metropolitan areas of Philly and NYC (think cheesesteaks and bagels) but they can officially lay claim to pork roll, a processed meat similar to ham or Canadian bacon. The food item was created by John Taylor of Hamilton Square (just outside of Trenton, NJ) in 1856. It was originally marketed as “Taylor Ham,” but renamed “pork roll” in 1906. Still to this day, the name remains a state-wide debate: NJ residents north of Trenton continue to call it “Taylor Ham” while South Jersey residents call it “pork roll.”

One of the most popular meals made with the ingredient is the Pork Roll, Egg, and Cheese Sandwich, sometimes simply called “Jersey Breakfast.” This iconic sandwich, which you can order at nearly any diner or bagel shop in the state, is typically served on a roll or a bagel, with the popular request of “salt-pepper-ketchup.”

For more intriguing sandwich lore, check out this article, detailing the different categories of sandwiches. 26 Summer Snacks that will Float Your Boat