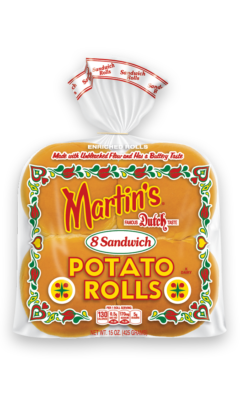 Melt butter in a small skillet over medium heat. When foaming subsides, add onion and celery and cook, stirring occasionally, until softened, 5 to 7 minutes. Stir in sage, thyme, and garlic and cook until fragrant, about 30 seconds. Remove from heat and let cool for 5 to 10 minutes.

Place turkey, sausage, 1/4 cup sweet potato flesh, and vegetable mixture in a medium bowl and mix with hands until incorporated. Form mixture into 4 patties. Season with salt and pepper to taste.

Light one chimney full of charcoal. When all the charcoal is lit and covered with gray ash, pour out and spread the coals evenly over entire surface of charcoal grate. Set cooking grate in place, cover grill and allow to preheat for 5 minutes. Clean and oil the grilling grate. Grill burgers over direct heat until an instant read thermometer reads at least 145°F in the center of burger, but no more than 165°F.

Lightly toast potato rolls on grill, about 30 seconds. Transfer to plate or tray and top each bun with a burger, cranberry-apple relish, gravy, spinach, and fried onions. Serve immediately.

Note: The recipe is written for the grill, but these can be cooked using your favorite burger making method.

Recipe and image by Joshua Bousel of www.seriouseats.com