Welcome to our third installment in our series that is all about our sense of taste! In our first blog, which focused on sweetness, we talked about how taste works: our taste buds receive information from the food we eat which the brain then interprets into various perceived categories of taste: sweet, sour, salty, bitter, or umami. In the second blog, we learned that while spiciness is not a type of taste so much as it is a sensation of heat perceived by the brain, it is often thought of similarly. Spiciness, which is almost always a result of some derivation of hot peppers in a dish, can work together with the other tastes to add interest and liveliness to a meal.

Now, most foods don’t just fall into one category. In fact, some of the tastiest foods consist of a delicate balance between several taste categories, an intricate blend of diverse ingredients, creating a complex and well-rounded dish. Think about it—most of us wouldn’t enjoy eating a spoonful of salt, or vinegar, or sugar, but combine those ingredients together with some oil and spices and you get a delicious vinaigrette.

Not only does having two or more qualities of taste in a dish make it more exciting, but it may actually help to amplify the flavor! (As the saying goes, “the whole is greater than the sum of its parts.”) Taking this one step further, it is often noted that certain tastes can either balance or enhance one another. Take a look at the diagram below from cooksmarts.com that shows which elements (including spice) are good for pairing with one another. These guidelines are great to keep in mind when cooking if you ever feel your dish is out of balance or tastes too strongly of a particular element. If you’ve ever tried a dish and thought “this is too sour!” or “this could use a bit more sugar,” it could be that your brain is indicating the food is imbalanced. You know cooking truly is a science when a simple addition of some sugar, or vinegar, or broth can make all the difference! This is why you see professional chefs tasting their food every step of the way, checking to see if anything is lacking.

With a bit of practice and some trial and error, you can work your way to becoming a flavor expert! While many of us often crave sweet, salty, or savory foods, the same is not typically true of sour or bitter foods. This may be less about human preference and more about practicality: the former three often indicate to our bodies that something is a good source of beneficial nutrients, while the latter two may do the exact opposite. Let’s dive deeper into sour foods. (We’ll talk about bitter foods in a future blog.)

In some cases, sourness may indicate that the food is unripe (think of unripe peaches or blueberries) or spoiled (as with milk), and therefore not good to eat. Obviously this is not always the case as there are many foods, particularly citrus fruits, which stay sour even after they are ripe, and also many fermented foods, such as vinegar, which have a sour taste yet are perfectly safe to consume.

Even though sour foods often make our lips pucker, they are an essential element to creating a dynamic and balanced dish. As mentioned earlier, sourness (or acidity) helps to balance out other tastes like salt, fat, and sweetness. (Think about popular flavor pairings like salt and vinegar chips, pickles on a burger, and key lime pie.)

There are many foods that can be described as sour—or tart, tangy, or acidic—but most fall into one of three categories: 1) citrus and other fruits, 2) fermented dairy products, or 3) vinegar-based products. While the flavor profiles and characteristics of these groups may differ greatly, they all have one thing in common: the presence of acid which contributes to the sour sensation.

Let’s learn more about these three categories of sour, and look at a featured recipe for each: Citrus fruits, like lemons and limes, are probably one of the first foods to come to mind when you think about the word “sour.” These fruits have a high amount of citric acid which accounts for their sour taste. However, they are not alone. Fruits in general have both fructose (a form of sugar) and acid (in the form of one of several organic compounds) in varying amounts. Fruits with more fructose will end up tasting sweeter while those with more acid will end up tasting sour.

There are a number of different organic acids which occur in fruits, but the three most common are: citric acid (found in citrus and berries), malic acid (apples, stone fruits, rhubarb), and tartaric acid (grapes, tamarind). Many fruits have more than one type of organic acid.

The amount of sourness in these fruits will vary based on the variety and natural balance of sugar to acid. This may explain why we often use different terms to explain the level of sourness in fruit. For example, we may call a lemon, “sour” but a green apple, “tart.”

Here are some of the most common sources of sour in fruits: This delicious citrusy dessert is fun spin on a famous pie. Cubes of Martin’s Butter Bread are mixed with butter, lemon juice, sugar, and a custard base, then baked into a decadent yet refreshing bread pudding. Finish off with some homemade lemon-infused whipped cream for the perfect (sour) finishing touch!

Imagine this recipe without the citrus elements; it would probably be way too sweet without the lemon juice and zest to help balance out the sweet-to-sour ratio and add some brightness to the dish. That’s one of the reasons citrus (particularly lemon) goes so well with desserts and sweet treats! Milk naturally contains lactose (a form of sugar) which, when introduced to specific bacterial strains, is converted into lactic acid through a bacterial fermentation process. Many popular milk-based products undergo this type of fermentation, which results in a slightly sour flavor—which we often call “tangy.” For an interesting take on tuna salad, try swapping out a portion of the mayonnaise for Greek yogurt or sour cream, both of which provide a tangy accent. And for an added bonus, this variation also adds in some chopped green apple and lemon juice for an extra burst of flavor!

The tangy elements in this sandwich help to enhance the salty/umami flavor of the tuna and also add a brightness that cuts through the fat of the mayonnaise. Vinegar is created by a bacterial fermentation process which converts ethanol or sugars into acetic acid, giving it its sour or pungent taste. Vinegar is such a versatile ingredient in cooking because there are so many flavors and varieties to choose from. Plus—it is an easy and convenient way to balance out a recipe and add some interest and “tang” where needed.

Here are some common vinegar-based foods: Many Asian-influenced recipes do a great job of balancing all five tastes, which makes this recipe a good example of what we discussed above. For sweetness, we have both brown sugar and honey. For salty, there’s soy sauce and salt. For sour, there’s lime zest and juice and rice vinegar. The soy sauce also contributes umami flavor, along with the garlic, sesame oil, and chili sauce. And then we have some bitter elements from the cabbage slaw and green onions! AND there’s even some spice!

Not only do the individual elements complement and balance one another, but the recipe as a whole works great together. The savory marinated chicken is a bit on the “sweet and spicy” side, so a topping of some vinegar-based cole slaw is just the refreshing contrast that is needed.

All of these flavor integrations help to create a well-balanced, wholesome meal! 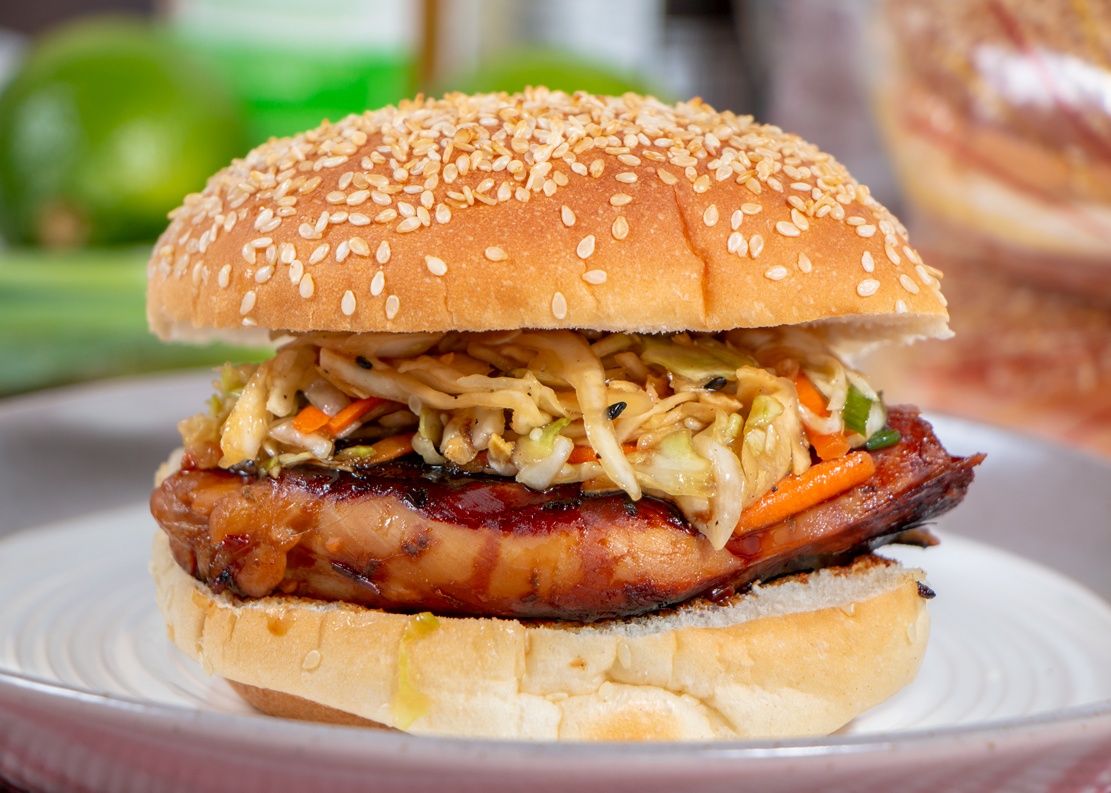