If you’ve been following along on our blog for some time, you’ve probably seen some of our previous posts discussing different types of taste, like sweet and sour. For a refresher or to catch back up, skim through the links below:

As a quick recap, we’ve discussed how there are five categories of taste: sweet, sour, salty, bitter, and umami (or savory); as well as the concept of “spicy” which acts similar to these. As we taste certain foods, we experience one or more of these sensations which our brains interpret as particular flavors unique to that food. Everyone tastes food slightly differently and has a specific flavor preference because we each have a unique palate, or “map” of taste buds on our tongue.

We also learned that the various categories of taste often work together by either complementing or enhancing one another, which is why dishes made up of many ingredients taste more complex and intriguing. Learning the art of balancing flavors can help you become a truly masterful chef. “Saltiness” is a relatively easy category to pin down, because it primarily comes from one key element: salt (the chemical compound Sodium Chloride, or NaCl). However, the role of salt in cooking is fairly complex, with many nuances.

Salt is incredible. Not only is it the easiest way to improve an otherwise bland dish, it also enhances aromas, balances out bitterness, and boosts many of the other tastes. When we taste salt, it “awakens” our palates making the other flavors more pronounced and the overall dish seem more rounded.

It’s no surprise that salt makes food taste better. It helps to mask bad flavors and make a dish seem brighter. But salt also has other uses beyond adding flavor. It can be used to cure and preserve meats, extract water from vegetables, or tenderize tough cuts of meat.

One example of the latter is through the process of brining. A brine is simply a highly concentrated salt water solution, and when meat is soaked in brine for a period of time, its proteins begin to break down and it is able to retain more moisture throughout the cooking process. This allows the meat to remain more tender and flavorful. Speaking of brines—they’re used for more than just curing meats. When food (like vegetables) is left in brine for a long period of time, it is allowed to ferment (or pickle) and develops a more complex, tangy, salty flavor. Pickled foods add great excitement and interest to a dish.

Chicken piccata is a classic example using a delicious briney ingredient: capers! The salty, tangy bites add a pop of flavor and help to balance out the more sour and bitter elements of the lemon juice and arugula, respectively. Add another salty element of aged parmesan cheese, and you have a clear winner of a recipe. While all salts are nearly identical in their chemical makeup (% NaCl), there are still a few key differences. Salt is a naturally occurring compound that can be produced one of two ways: by evaporating salt water or by extracting it from underground salt mines. The different techniques and processes allow for salt to come in a variety of shapes, sizes, and colors. Here are some of the most common types of salt:

Tip: When measuring by volume, there is a big difference between the “saltiness” of different types of salt because of the crystal size, or density. One cup of kosher salt will taste much less salty (about half as much) than one cup of table salt because kosher salt is flaky and irregularly shaped, so it takes up more space. For more accuracy, measure by weight instead. Keep this in mind especially when substituting one type of salt for another in a recipe. This recipe serves to illustrate how salt can enhance sweetness in things like fruit. Many people swear by adding a pinch of salt to fruits such as watermelon or cantaloupe as a way to bring out more of the natural sugars and flavors. This panzanella salad, made with cubed Martin’s Party Potato Rolls, includes two salty elements: crumbled feta cheese (another example of a brined food) and flaked sea salt, used as a finishing salt or garnish.

(While you’re at it, try a piece of watermelon with and without a sprinkle of salt and see if you can taste a difference!) 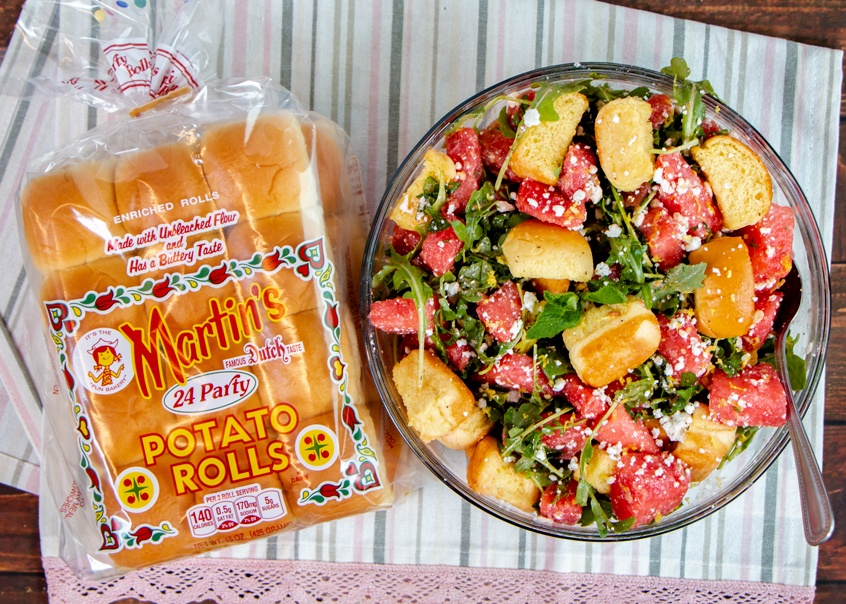 How to Use Salt

One of the best things you can master in the kitchen is learning how to properly season food. This starts with salt—think how many recipes you’ve seen that call for “salt to taste.” However, these instructions can be vague and over-simplified. Part of the reason for that is that taste is so subjective. As mentioned above, everyone has a unique palate with different taste preferences, so it is hard to accommodate everyone with a single dish or recipe.

A good rule of thumb is to salt generously enough to add the necessary flavor, but still slightly less than you think you should. You can always serve your meal with additional salt shakers on the table for those that want to add a bit more salt. (It’s easier to add more salt than to make something taste less salty.)

Another good lesson you can learn from watching professional chefs is to season as you go—and always make sure you are tasting your food every step of the way. Salting at different stages of cooking achieves different results. For example, salt added during the cooking process will dissolve and add flavor, while salt added just before serving will add a nice, textural crunch and a sharper burst of flavor. This is another factor to keep in mind when deciding which type of salt to use.

Tip: If you’ve accidentally over-salted a dish, try some of these tips to save it! Salty ingredients can add a welcome flavor and textural contrast to more of a one-note dish. Pulled pork is a good example; slow cooked meats often tend to develop a very uniform texture and a static, albeit complex and delicious, flavor. Adding some dynamic bursts of flavor and texture takes this dish to the next notch.

In our case, we topped this BBQ Pulled Pork (a little on the sweet & tangy side) with some crunchy onion rings and salt and vinegar pork rinds, but you could also use potato chips. The same idea would work great for sloppy joes or burgers! A Note About Salt

While sodium is an essential nutrient that our bodies need to function, too much of it can be bad for our health, specifically in relation to blood pressure and heart health. It is a good idea to be aware of how much salt you are consuming, whether in prepared foods or in home cooking.

For tips on reducing your sodium intake, see our blog post: https://potatorolls.com/blog/nutrition-tips-sodium-reduction/