If you follow us on social media or visit our website or blog frequently, you may know that Martin’s participates in several food festivals and food industry trade shows each year. These shows present a great opportunity for us to connect with end consumers and potential food service customers. We often set up a booth where we can display our products and talk to attendees, and also occasionally donate product to restaurants and other vendors to use for whatever they might be cooking.

Another benefit to these shows is that they allow some of the Martin’s team members to travel to different regions around the country (and sometimes even other countries). As you may or may not know, there are many restaurants around the country that use Martin’s rolls and bread for some or all of their menu offerings. These regional business trips give us a perfect chance to stop in at some of these restaurants to chat with the staff and sample some delicious food on Martin’s products!

We just had the opportunity to do this recently as we attended a trade show in the New England area. Read on for a quick recap of the event, followed by a detailed (and mouthwatering) description of some great restaurants to check out in Boston, Massachusetts. The New England Food Show, which took place February 25-27, is a hub for restaurateurs and food service personnel alike offering culinary demos, speakers, education sessions, and a trade show floor full of enticing exhibitors. As an exhibitor, Martin’s goal was to gather additional foodservice customers in the entire New England area. While retail sales remain the largest part of our business, our foodservice segment is the fastest growing!

Even though we were mainly in town for the show, there was still time to check out some restaurants that were serving up delicious dishes on Martin’s Potato Rolls! Kings’ upscale, retro-style décor and atmosphere make it a great spot for family outings, corporate events, or connecting with friends

Kings Dining and Entertainment, or Kings Bowl America, has numerous locations throughout the country, the newest of which is Kings Seaport in Boston, MA which just opened in October 2017. Kings was established in 2002 as a way to “merge genuine food, creative cocktails, and social gaming to create the ultimate entertainment experience” (all in a very cool, retro setting).

While the Martin’s team only had a chance to sample the delicious food, they definitely would have also enjoyed spending the evening hanging out, bowling, and playing some retro arcade games—all activities for which Kings is the perfect spot. In addition to bowling, Kings has a number of retro arcade games

The Kings Seaport menu boasts ten burgers, all but one of which are nestled in a Martin’s Roll. Martin’s team also had the chance to chat with one of the managers who was very pleased with our products, saying that no one at their restaurant has ever complained about our bun!

You can find out more about Kings Dining and Entertainment including their other locations at: http://www.kings-de.com If you’re looking for another upbeat location just outside the Seaport District, check out Coogan’s.  Although you won’t find games and activities like at Kings, you’ll still find the nightlife atmosphere, bumping music, and television screens on which to watch your favorite sports games.

Coogan’s, located in Boston’s Financial District, is a classic Irish pub that serves American-style pub food like wings, pizza, burgers, sandwiches, sliders and apps. Its cozy yet lively atmosphere makes it a great place for business luncheons or dinner gatherings with friends. The restaurant is a part of Glynn Hospitality Group, “a family run organization that operates some of Boston’s most iconic restaurants, bars, pubs and entertainment venues.” The Martin’s team started their meal by trying Poutine Fries, a local favorite appetizer. Then for the main course, they all tried something a little different—the Coogan’s burger (made to order), the fish sandwich, and the pulled pork, all on Martin’s 4-Inch Potato Rolls. 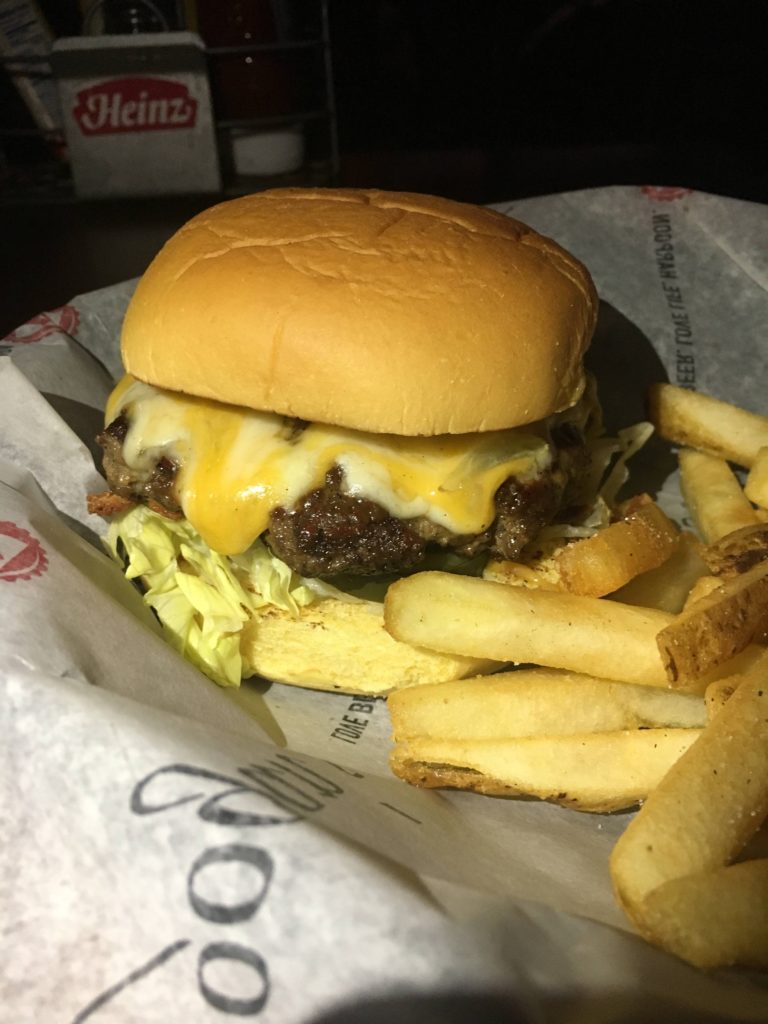 “Coogan’s Burger” with lettuce and cheese, on a Martin’s 4-Inch Potato Roll Our team had the chance to speak to one of their managers who said he is strong proponent for Martin’s everywhere he goes, adding the fact that he thought the rolls they used prior to Martin’s “tasted like cardboard.” Our waitress gave us additional insight, saying that customers had noticed the difference once they switched to using Martin’s rolls. She even admitted that she sometimes just snacks on the rolls themselves.

While we didn’t get the chance to stop there, Shake Shack also has a prime location in the Boston Seaport District, serving up their delicious menu of burgers, hot dogs, and chicken on Martin’s Potato Rolls!